Captain Tarkan was born in Trabzon/Turkey. He is now 45 and lives in Istanbul with his family. Tarkan graduated from the Ege University where he studied Ocean Science and Marine Conservation, and received qualifications in First Medical Aid, Electronic Navigation Systems (ENS) and International Safety Management (ISM) Code. He also successfully completed additional studies in Florida, USA, Dive master and Mechanic.

On top of that, Tarkan also studied English in London UK. Tarkan currently holds licences as 3000GT Master, Yacht Master 500 GT. Tarkan has been working in the yachting industry since 1998 and has built up an impressive 18 years’ experience as Captain on board yachts from 22m up to 55m. He has extensive cruising experience knowledge having sailed around the world, including the Caribbean Sea, the North Atlantic and Pacific Oceans, Red Sea, Black Sea and Mediterranean Sea.

Tarkan is a very passionate and enthusiastic Captain who loves running yachts and showing people. Greatest time they can have on board! He has been Captain on board ORIENT STAR for 7 years now. When he is not on board he enjoys spending time with his family and friends. He speaks fluent Turkish and English. 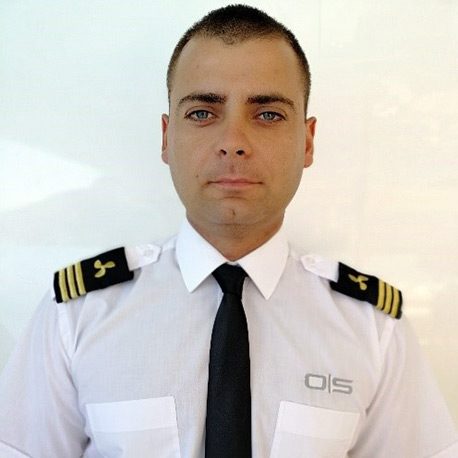 George 33, born in Varna, Bulgaria. I achieve marine engineering bechelor’s degree in Naval Academy Nicola Y. Vapcarov in Varna, Bulgaria. With over 10 years’ of experience as engineer on cargo vessels, he is improving hisself being on the private either charter yachts. His passion is hunting, offroad, books and music. When not on board George spends time in his workshop for repair all kind of diesel fuel pumps and injectors. 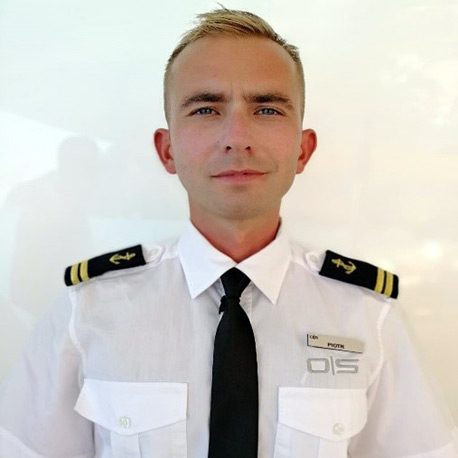 Piotr 28, born in Olesnica, Poland now lives in Szczecin. After graduating High School, started work in factory however it was not his cup of tea. In 2014 he started his maritime carrer working as engineer-deck on 18 meter diving boat in Baltic Sea, which was exploring sunken wrecks. Year after he was employed as Deckhand on 33 meter luxury yacht for first time. Since then he has worked on various yachts in deck and engineering departments. Piotr enjoys surfing, swimming, diving and traveling most of all which is perk of working on yachts. 2019 he started studying Marine Engineering in Maritime Academy in Szczecin as he wants to become professional engineer one day. Piotr speaks fluently English and knows basic Spanish and Italian. When not on board he spends most of the time in Poland with family and friends. 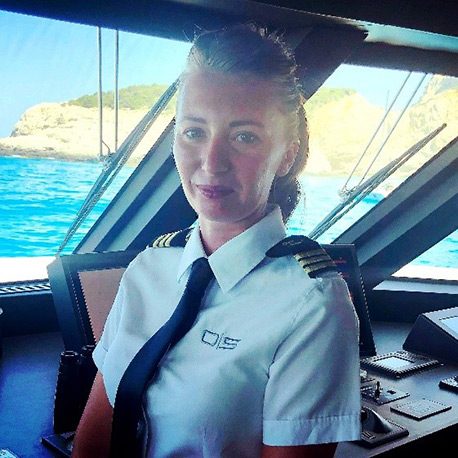 Paula 31 was born in Szczecin, Poland where she lives now with family. She studied at the Maritime University of Szczecin, and also studied celestial navigation during sailing trips in the summer breaks. While undertaking her degree, she undertook an intership for Polsteam in 2010, working on one of their cargo ships, transporting in ex. Sugar, corn, grain from Europe to both Americas and Africa. In 2015 she became a navigational officer for Polsteam Company, and also start working during the breaks on m/v Nawigator XXI. On this modern research/ training vessel owned by the Maritime University of Szczecin she worked as Chief Officer with students making wrecks research on Baltic Sea. After 8 years of work on cargo ships, she decided to change something in her life. Actually she had 2 years of experience in superyachts, with Boss trips, bridge watch, charters and yard periods. Sailing, watersports, books and a lot of travel are a true passion of her, and time to spend with her family and friends. 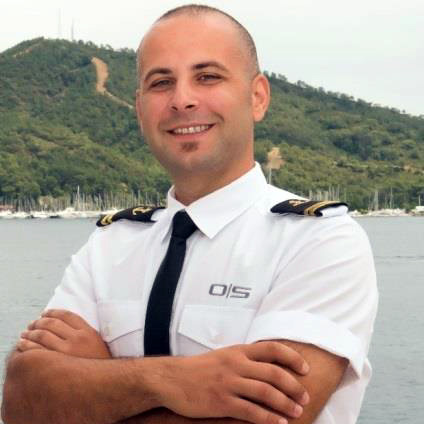 Ugur is 29 and is already an experienced deckhand, having worked on board OREINT STAR for 5 years. After graduating from the High School in Istanbul, Turkey, Ugur began his maritime career in 2010 in Marmaris, Turkey. He worked on both sailing and power boats and slowly worked his way up to the Yachting industry. Ugur would like to build a long term career in the Yachting. His hobbies include outdoor activities such as walking, swimming and visiting historical sights. He speaks fluent Turkish and English. 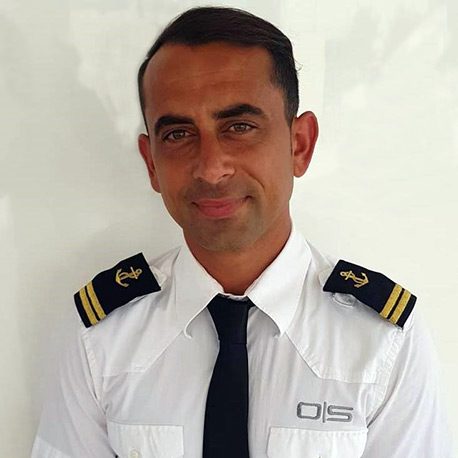 Murat 31, born in Istanbul 1988 currently lives in Göcek, Turkey. After graduating school he has followed his hobby and interest which was music. Murat has become a professional dancer and had appeared in few Turkish music hits, dancing in TV and concerts. Murat has begun his maritime carrer 9 years ago on my Hulya 40 meters in Gicek. Murat easily earned our respect and admiration with his smooth, hardworking, respectful and sincere personality. He has been working in our team for 2 years continuously. Apart from music Murat enjoys skiing, snowboarding and various sports activities including swimming, surfboarding and riding jet skis. When not onboard he spends time with his wife, daughter, son and friends. 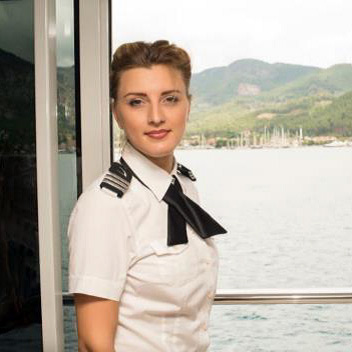 Maia grew up in Ukraine. She is passionate about service and extremely attentive to detail. She has been part of the ORIENT STAR team for 4 years now and we are happy she is staying with us for the 2019 season. Maia loves organising parties and celebrations on board to make sure the Guests get an unforgettable experience and sweet memories to take home. 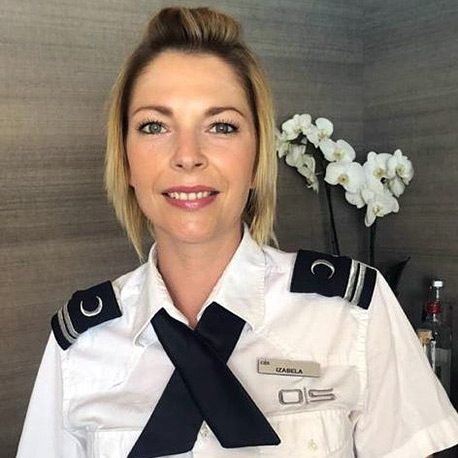 Izabela 34, was born in North of Poland in May 1985. She started her career working on the boats being still in the high school. After all the stories heard as a young person from seaman’s family members already choose her way for the lifetime. It’s never easy to be away from family and friends, sometimes for few long months but she discover herself loving this lifestyle. Already fifteen years of experience working at sea makes Izabela very experienced and passionate stewardess. She was working on many different kinds of boats starting from passenger ships, fast craft, offshore boats, seismic ships, oil rigs and platforms, finally she is improving herself being on the private either charter yachts where she can work with highest standards and show her big potential and professionalism. Her passion is traveling and discovering new places culture. Stewardess job just makes her passion much easier to see more beautiful places of the world. Having free time she is always back home in Poland and enjoying time with her family and friends. 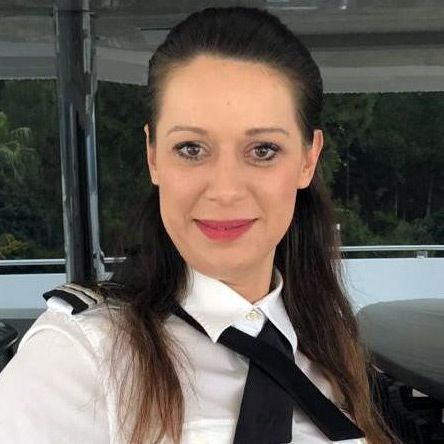 She was born in Croatia and grown up in same. She has complete school of economy. She is very strong team player with exceptional and interpersonal organisation skill. She has been working on yachts as stewardesses since 2016. She has deep interest in tourism and everything about sea. Her goal is professional development and successful career in yacht industry. She can speak fluent English and Italian language. 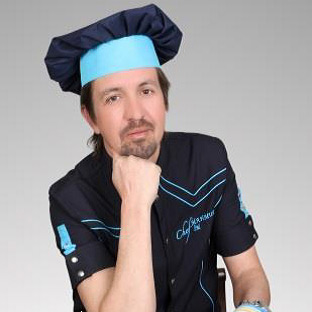 Chef Mahmut is 37. He is a highly qualified Chef and began his career at the early age of only 14. After getting his Chef training he worked as a Chef in a top class hotel in Istanbul and for the last 9 years he has been working in the Yachting industry. 5 of them on board ORIENT STAR.

Mahmut is very passionate about cooking which doesn’t have any secrets to him anymore. He particularly loves the Mediterranean cuisine, including Turkish, Greek, Italian & Spanish, but is also familiar with the traditional meals from the Far East!

Mahmut is committed to providing the best service and culinary experience for the Guests. When he is in the galley, Mahmut loves experimenting and creating new tastes and flavours. Apart from that, he is a keen diver and loves walking generally speaking. His ambition is to open his own restaurant – in any part of the world!